In the 2019 campaign we planned to perform inside the house similar works to those performed in previous campaigns outside – removing cement mortar plaster from large interior surfaces and applying lime-sand mortar plaster on those surfaces, to contribute to reducing excessive humidity in the walls. Details here – Activity Plan for 2019.
The wide-ranging works required for the entire building – mounting the shingle roofing on the nave and the tower, restoring the exterior plaster, checking the electrical network, introducing a lightning rod or arranging the cemetery – will be continued to the extent that more substantial funding resources are identified.

Details about costs can be found here – Activity Plan for 2019. 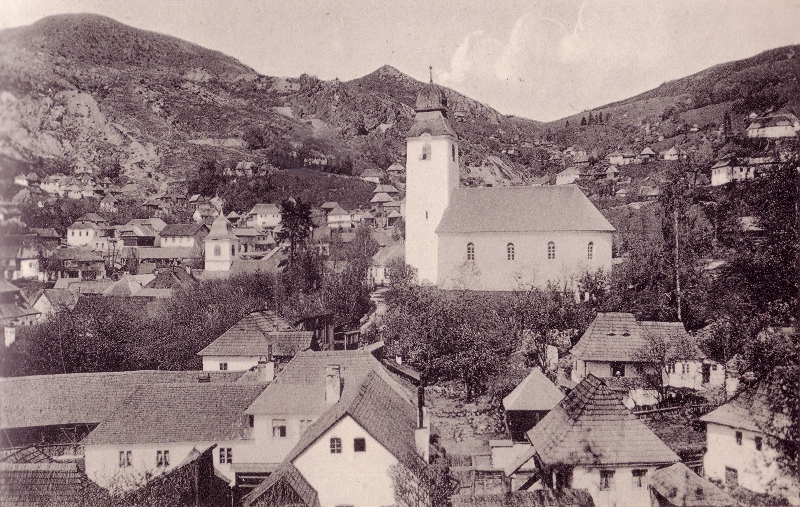 2. Description of the building

A first Unitarian church was built in 1568, made of wood, followed by a masonry building set on fire in 1784, which was then replaced by the present church, built in 1796.

The church architecture is imposing by its simple volumetry, with wide surfaces free of any decoration, articulated in a well-balanced composition dominated by the vertical tower. The tower’s baroque roof framing in two registers, together with the roof framing of the access aedicula on the north-eastern side, are the specific elements of this monument.

Two epigraph plates are mounted on the tower’s access facade, showing the monument’s age: the first one is a dedicatory inscription installed on the occasion of the church refurbishment in 1958: Ez a templom épült az EGY ISTEN / tiszteletére 1796-ban / javitatott 1958-ban [This church was built for the One God in 1796, refurbished in 1958]; the second one only notes the date when the present church was built: A¯N 1796. The solemn monumentality of the church interior is moderated by historical furniture, the most remarkable being the pulpit and the organ (installed in 1862).

Located on the top of a small hill, in the town’s central area, the church dominates the Central Square complex and radiates upon the entire surrounding man-made landscape, standing out as a valuable element of the urban structure. The church, together with the other monuments grouped around it, belonging to the Unitarian community – the cantor’s house (no. 390), the parish house (no. 391) and the bell ringer’s house (no. 553) – illustrate a remarkable particularity of the town’s urban structure: the organization in congregation nuclei.

The church was lastly refurbished in the 1990s, when large portions of the interior and exterior plaster, for about one third of the height, were replaced with cement plaster. The effects of cement upon the historical construction materials and systems, well known to those who work in the field of heritage protection, were not late: salt efflorescences appeared, ascensional humidity in the walls increased, the plaster lost adherence to the brickwork and in some areas it even came off the walls. The current roofing, made of plane folded metal sheet, was installed in the 1960s to replace the historical shingle roofing. That was an important change in the building’s authentic architectural image, which had been characterised before by the strong black and white contrast between the whitewashed surfaces and the weathered wood. These relatively recent interventions have not generated major damages overall, but they resulted in a change in colouring and texture and a loss of the craftsman quality of materials and surfaces.

The church maintains its historical carpentry: doors, windows, the bell tower shutters. These elements require current repair works and locally, in the case of a few shutters, they even require more serious works to repair and replace some seriously damaged parts.

The conservation and restoration works envisaged aim to recreate a functional and aesthetic balance between the parts of the building, by removing inadequate materials (cement, plane metal sheet) and restoring the traditional finishes (lime-sand plasters, shingle roofing).

These works, although having a moderate scope, make it possible to achieve conservation and valorization goals by repairing or replacement of finishes and limited consolidation works; in addition they envisage to increase safety and comfort by upgrading installations (sockets and interior/exterior lighting; heating; lightning rod).

In 2011 within the ARA Summer School works have been undertaken to remove the cement mortar, to refill the joints with lime grout and to restore some of the bell tower window shutters.

This year we worked together with shingle craftsmen in Horea village to replace the degraded metal sheet roofing with a traditional shingle roofing. The wide-ranging consolidation works in the 2017 campaign have been followed this year by consolidation works, completions in damaged walls, refilling joints and restoring plaster and mouldings in the large areas strongly affected by displacements.

In parallel with the urgent works mentioned above there was a local initiative from Adrian Petri, owner of Casa Petri in Roșia Montană (see House with urban influences ( 17th c., 1870-1890, post 1935, Roșia Montană no. 331A, included in Adopt a House Programme), who proposed us to arrange the interior of the Unitarian church bell tower, with minimum interventions, in order to include it in the guided tours offered by local people. The floors were consolidated by doubling with wooden boards, lighting installations were mounted, exhibition materials were displayed, the existing carpentry was reconditioned or missing elements were recreated. Details here – Activity Report for 2018.

During the 2017 campaign we managed to finalize urgent works as a first necessity – introducing a reinforced concrete belt at the foundation and metal belts under the cornice. Details here – Activity Report for 2017.

The funds collected made it possible to finalize only the design project required for authorising the intervention; the latter will be divided in two stages, because of the administrative blocking: emergency interventions to the portico and conservation-restoration works on the entire church once the town’s urban planning regulations are in force. Details here – Activity Report for 2014.

How do I get involved?